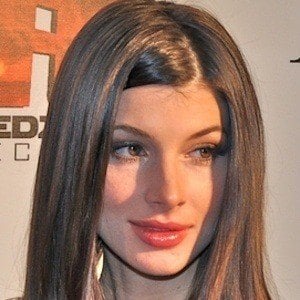 Glamour model and actress, she has appeared in Maxim both in the United States and internationally. She has also been featured in Playboy's lingerie catalog.

She was a cheerleader in high school but simultaneously pursued dance, gymnastics, diving and track and field. Her introduction to modeling came while studying at Cal State Long Beach, when she entered an international swimsuit competition and placed in the top ten. She was signed immediately afterward.

She played a variety of characters on The Tonight Show With Jay Leno.

Though she was born in Virginia, she grew up in California on a large ranch. She has a sister, who studied fashion design and used her as her model.

She has her own Bench Warmer model trading card, which can be traded like a baseball card. Other models who were featured included Pamela Anderson and Charisma Carpenter.

Cora Skinner Is A Member Of