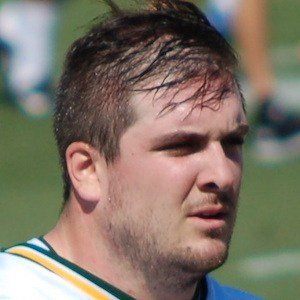 Center who was drafted by the Green Bay Packers in the fifth round of the 2014 NFL Draft. He previously started in 26 consecutive games for the Ohio State Buckeyes, during which time the team won a school record 24 straight games.

He was a four-year letterman in track & field at Boardman High School and won state medals in shot put.

Though he was drafted to be a backup center for the Packers, he ended up starting every game of his rookie season due to a preseason injury to regular starter J.C. Tretter.

His parents are James and Laurie Lindsley.

He began snapping the ball to Pro Bowl quarterback Aaron Rodgers in Green Bay in 2014.

Corey Linsley Is A Member Of