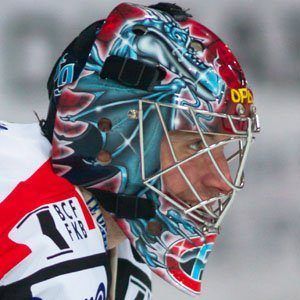 NHL goaltender who became the first Frenchman to win the Stanley Cup, which he earned as a backup on the Chicago Blackhawks in 2010.

He played in Grenoble, France, to advance his skills to the NHL level.

After winning numerous awards in France, he moved to the NHL, where he was chosen to the 2008 All-Star team.

He became a Swiss citizen after marrying a Swiss woman.

He was the backup goalie, along with Martin Brodeur, for the Eastern Conference in the 2005-06 NHL All-Star Game.

Cristobal Huet Is A Member Of