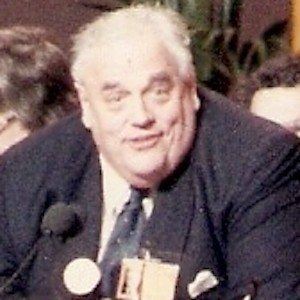 Liberal English politician who served as a Member of Parliament for twenty years from 1972 to 1992. He was notably involved in a cover-up of a health risk at a local asbestos factory that caused many to call for him to be stripped of his knighthood.

He joined the Liberal Party in 1945, at age seventeen before becoming Rochdale's mayor.

He was the subject of a scandal regarding sexual abuse allegations that were made against him in the 1970's but didn't really come to light until after his death.

He was never married but had two siblings, Eunice and Norman.

He was appointed to the Order of the British Empire by Queen Elizabeth II in 1966.

Cyril Smith Is A Member Of