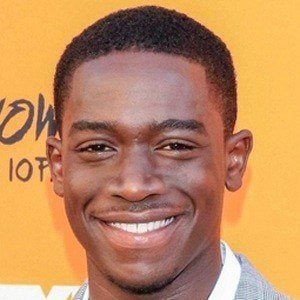 Actor best known for his role as Franklin Saint on the John Singleton-produced crime series Snowfall. He has also been featured on series like Doctors and The Missing, as well as in films like Megan Leavey.

He was a talented soccer player growing up but eventually decided to focus on acting, studying at Brunel University London.

He won the Emerging Talent Award at the 12th Screen Nation Film and Television Awards in 2017.

He was raised by his mother in a single-parent home. He is the youngest of six children.

He was cast alongside Amin Joseph on Snowfall.

Damson Idris Is A Member Of