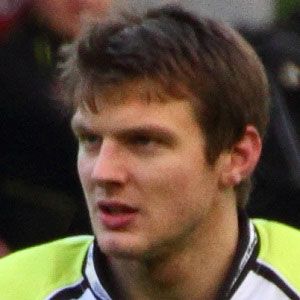 Welsh rugby union fly-half best known for his years in club rugby with the Ospreys. He won back-to-back RBS Six Nations Championships in 2012 and 2013. He began playing for the British and Irish Lions in 2017.

He was born in Morriston, Swansea and began playing for Swansea in the Welsh Premier Division in 2007.

He became the youngest player ever to play in 100 games for the Ospreys.

His father worked in the oil industry. He married Alexandra Cummings in 2016.

He has been teammates with Aaron Jarvis on the Ospreys.

Dan Biggar Is A Member Of