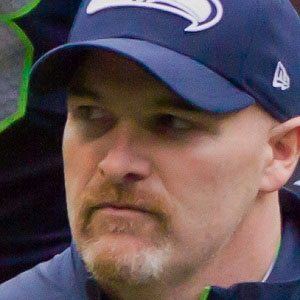 Football coach who won Super Bowl XLVIII as the defensive coordinator of the Seattle Seahawks. That season, his defense led the NFL in takeaways, fewest yards allowed and fewest points allowed. He became head coach of the Atlanta Falcons in 2015 and he led the team to Super Bowl LI in 2017.

He was an All Mason-Dixon track and field athlete at Morristown High School.

For his athletic accomplishments, he was inducted into the Salisbury University Athletics Hall of Fame in 2005.

He married a woman named Stacey.

He won Super Bowl XLVIII with the help of the game's Most Valuable Player, linebacker Malcolm Smith.

Dan Quinn Is A Member Of