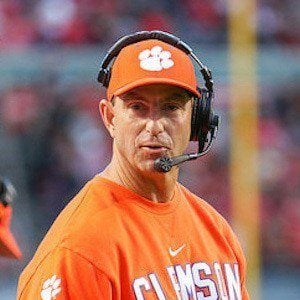 College football coach who made his head coaching debut for Clemson University in 2008. He led Clemson to NCAA Championships in 2016-17 and 2018-19.

He played a wide receiver in college for Alabama.

He won the Bobby Dodd Coach of the Year award in 2011.

He married Kathleen Swinney in 1994 and they have three sons named Will, Drew and Clay.

Dabo Swinney Is A Member Of