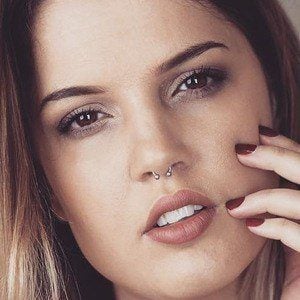 Greek lifestyle vlogger known for her channel i Mikri Ollandeza, which has accumulated more than 280,000 subscribers. Her posts mostly include challenge videos, tutorials, and vlogs.

Before becoming a YouTube sensation, she competed on the inaugural season of Greece's Next Top Model.

She has also garnered over 190,000 Instagram followers to her imikriollandeza channel.

She was born in Utrecht, Netherlands and at the age of 9, she moved to Nafplio, Greece. She later she moved to Athens. She has dated Dimitris Sarantopoulos, with whom she has a dog named Chili.

She attended a Maybelline launch party along with Victoria's Secret model Adriana Lima.

Danae Georganta Is A Member Of