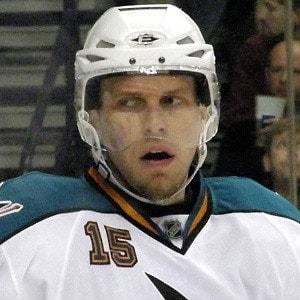 NHL right winger who began his career with the Atlanta Thrashers in 2001 and set the record for most career international goals of any Team Canada player. With the Ottawa Senators, he scored 50 goals in back-to-back seasons in 2006 and 2007.

He proved himself a talented hockey player from his early childhood, getting drafted by the Red Deer of the Western Hockey League at the age of 16, a big step towards an eventual pro career.

He won the NHL's Calder Trophy for top rookie in 2002 and was named to his first All-Star game the following season.

He was born in Freibourg, West Germany, the first of two sons born to Karin and Murray Heatley; his father was also a professional hockey player.

He was selected to grace the cover of the 2003 installment of EA Sports NHL video games, but due to a reckless driving incident, EA decided to switch their model to Joe Sakic - though a number of boxes bearing Heatley's image already shipped out.

Dany Heatley Is A Member Of