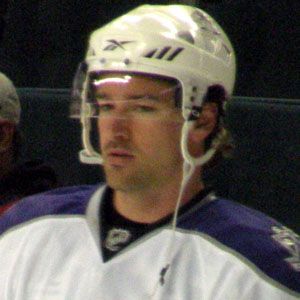 NHL winger who won the 2014 Conn Smythe trophy as playoff MVP for the Los Angeles Kings after recording 9 goals and 25 points during the Kings' Stanley Cup run.

He entered professional hockey when he was just 16, after being drafted by the OHL's Plymouth Whalers. He was then selected 28th overall in the 2000 NHL Draft by the Philadelphia Flyers.

He won his first Stanley Cup Championship with the Carolina Hurricanes in 2006 and his second with the Kings in 2012.

He was born in Cobourg, Ontario. In 2006, he married Kelly Williams.

He and center Anze Kopitar were the Kings' top two scorers during the team's 2014 Stanley Cup Championship run.

Justin Williams Is A Member Of