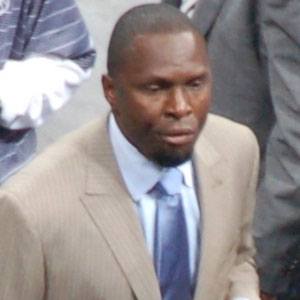 Former NBA point guard who played for the Orlando Magic from 1995 to 2003, earning the NBA's Most Improved Player Award and the Sixth Man of the Year Award in 1999. In 2009, a year after retiring, he became an assistant coach for the Dallas Mavericks.

He graduated from Ashbrook High School in 1988, then played college ball at Fayetteville State.

After going undrafted by the NBA in 1991, he spent five years playing professional basketball in Greece, Canada, Cyprus and Spain before the Magic gave him an opportunity in 1995.

He was born in Gastonia, North Carolina.

He and sharp-shooting small forward Dennis Scott were teammates on the Magic from 1995 to 1997.

Darrell Armstrong Is A Member Of