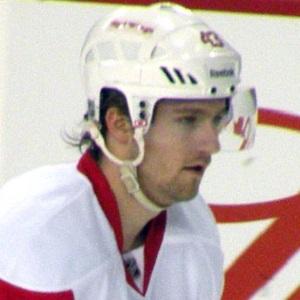 NHL left wing and center who earned a reputation as one of the NHL's quickest and best defensive players. He debuted for the Detroit Red Wings in 2007.

He played his junior career for both the Selkirk Fishermen and the Medicine Hat Tigers and also won gold in the World Junior Championships as a member of the Canadian national ice hockey team.

He scored his first career hat trick in a 2014 game against the Toronto Maple Leafs.

He was born and raised in Winnipeg, Manitoba, Canada.

He became teammates with Johan Franzen on the Red Wings.

Darren Helm Is A Member Of