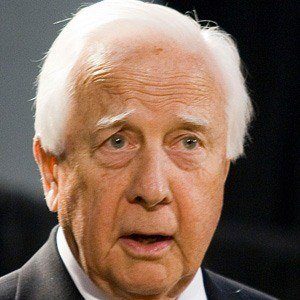 Award-winning author and historian who is known for The Johnstown Flood and the Pulitzer Prize-winning biographies, Truman and John Adams. He received the prestigious National Book Award for two of his other works: The Path Between the Seas and Mornings on Horseback.

He loved school as a child and wanted to become an architect, actor, painter, writer, and lawyer, before eventually settling on medical school. Ultimately, however, he received a degree in English from Yale University.

He married Rosalee Ingram Barnes in 1954. The couple went on to have five children and nearly twenty grandchildren.

His biography of John Adams was adapted into an HBO mini-series.

David McCullough Is A Member Of