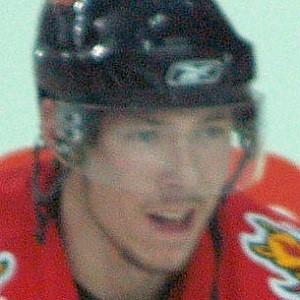 NHL right winger who began his career with the Calgary Flames in 2006. After six years with the Flames, he signed with the Phoenix Coyotes in 2012.

He scored a goal in each of his first three games with the Flames, the first rookie in Flames history to do so.

He skated in an on outdoor game during his days with the University of Michigan, another one for Team USA at the 2010 World Championship and with the Flames at the 2011 Heritage Classic.

His cousin Phil Kessel overcame cancer to play in the NHL for Boston and Toronto. He got engaged to Survivor: Tocantins contestant Erinn Lobdell in 2014. They married the same year and welcomed a son in 2015.

He played alongside Jarome Iginla on the Flames.

David Moss Is A Member Of