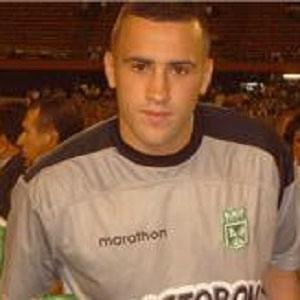 Goalkeeper who joined Nice in 2008 and became a member of the Colombian national team in 2007. He later would become a member of Arsenal in 2014. He signed with Napoli in 2019 after playing for the club on loan for one season.

He debuted professionally for Atletico Nacional in 2005 after coming up through the club's youth system.

He helped Atletico Nacional win the Categoria Primera Apertura in 2005 and 2007.

He married Jessica Sterling in 2012. They have a daughter named Dulce Maria and a son named Max. His sister Daniela was married to James Rodríguez and they had a daughter together.

He and striker Jackson Martinez became teammates on the Colombian national team.

David Ospina Is A Member Of