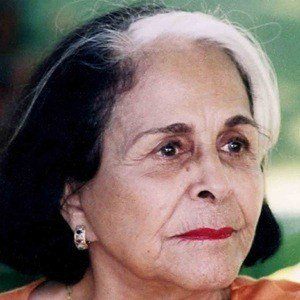 Dominican revolutionary whose three sisters were assassinated on November 25, 1960 for opposing the regime of dictator Rafael Trujillo. She escaped death on that fateful day and later opened a museum in her sisters' honor.

She and her three sisters formed an anti-Trujillo organization called the Movement of the Fourteenth of June.

In honor of Dede Mirabal's murdered sisters, the United Nations General Assembly established an International Day for the Elimination of Violence against Women, held annually on November 25.

Her husband, Jaimito, discouraged her from becoming involved in her sisters' revolutionary activities; however, she ultimately could not be dissuaded from actively opposing Trujillo's violent regime.

She and Joaquin Villalobos were both Latin American political revolutionaries.

Dede Mirabal Is A Member Of