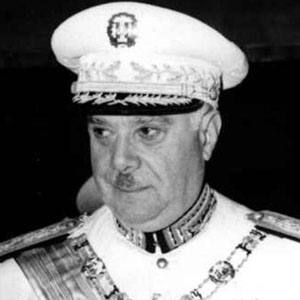 Politician who served as President of the Dominican Republic from 1930-38 and from 1942-1952. Until his 1961 assassination, he retained control of the Dominican government through his manipulation of puppet presidents.

He rose to power through a coup against Dominican leader Horacio Vasquez.

He was involved in the brutal 1960 murder of three sisters -- the Mirabals -- who opposed his regime.

His marriages to Aminta Ledesma, Bienvenida Ricardo, and Maria Martinez produced a total of four children. With Lina Lovaton Pittaluga, he had two more children.

He had an amiable relationship with Spanish dictator Francisco Franco.

Rafael Trujillo Is A Member Of