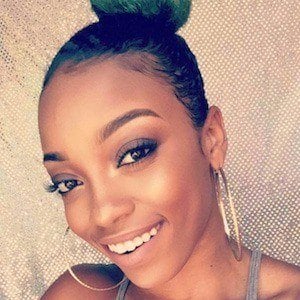 Professional dancer and choreographer who first rose to fame as a backup dancer for Disney star and best friend Zendaya.

She is also recognized as the daughter of Basketball Wives LA star Sundy Carter.

She is also a makeup aritst and showcases her skills on her self-titled YouTube channel. She has earned upwards of 290,000 Instagram followers.

She and her sister KK were born as a result of their mother's marriage to television personality Cedric Carter. She has another sister, Kennedy, who came out of Sundy's relationship with Larry Hughes.

In February 2016, she did Tanaya Henry's makeup for a shoot with creative director DeWayne Rogers.

Deja Carter Is A Member Of