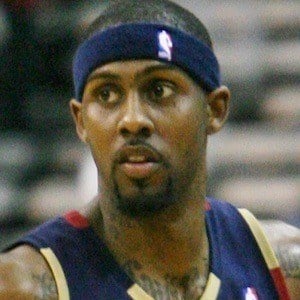 NBA journeyman shooting guard who led the NBA in steals in 2004-2005, helping him earn a spot on the 2005 NBA All-Defensive First Team. He's best known for his time with the Golden State Warriors, Washington Wizards and Cleveland Cavaliers.

In his one year of college basketball at Saint Louis University, he was named the USBWA National Freshman of the Year and a First-team All-Conference USA selection on his way to helping the Billikens advance to the second round of the NCAA tournament. He was drafted 8th overall by the 76ers in the 1998 draft.

He was a participant in the 2000 Slam Dunk contest. He was a childhood friend of rapper Nelly.

He has a child with reality personality Sundy Carter.

He had his best season in the NBA in Washington while a teammate of Gilbert Arenas.

Larry Hughes Is A Member Of