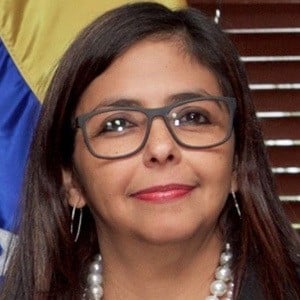 She originally started her career within the Chavez administration where she served as the Internal Affairs Director in the Ministry of Energy and Mines. Then in 2013, she was appointed Minister of Popular Power for Communication and Information.

She has received sanctions from several countries including Canada, the European Union, Switzerland, and the United States.

She is the daughter of Jorge Antonio Rodriguez who was the founder of the leftist part Socialist League.

She was succeeded by fellow politician Diosdado Cabello as President of the Constituent Assembly in June of 2018.

Delcy Rodríguez Is A Member Of