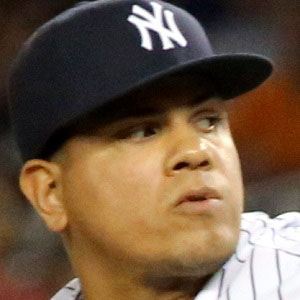 In 2011, this pitcher debuted with the MLB team the New York Yankees, initially playing in two games. After being transferred to the minor league team the Scranton/Wilkes-Barre RailRiders, he returned to the Yankees in 2013 and played in his first All-Star game the following year.

After being designated an Aflac All-American player during his high school years and being selected for the United States' Junior National Baseball Team, he was awarded a baseball scholarship to attend Vanderbilt University. He turned the offer down to accept a one-million-dollar bonus from the Yankees in the 2006 MLB Draft.

Because of his six feet and eight inches height, he chose the Yankees jersey number of sixty-eight.

The son of Dominican immigrants Marie and Jamie Betances, he spent his early days in Manhattan, New York. After beginning his Major League Baseball career, he bought a Teaneck, New Jersey home for his parents.

He and Andrew Miller became New York Yankees teammates in 2015.

Dellin Betances Is A Member Of