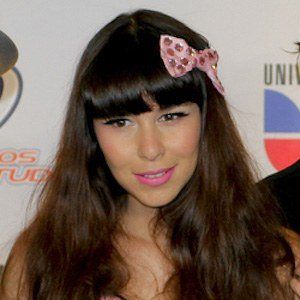 Mexican singer best known as the lead vocalist of the pop band Belanova. The band has released almost half a dozen full studio albums and won a number of awards, including Best Pop Album by a Group or Duo at the Latin Grammy Awards.

Her music career began when, at eight years old, she won the Los Mochis singing competition.

She made her acting debut in the online series Yo También Soy Marilyn. She has also modeled for Cherry Project.

She was born Denisse Guerrero Flores in Los Mochis, Sinaloa. She later moved to Guadalajara, Jalisco.

She and Belanova worked with Aleks Syntek on the single "Laberinto."

Denisse Guerrero Is A Member Of