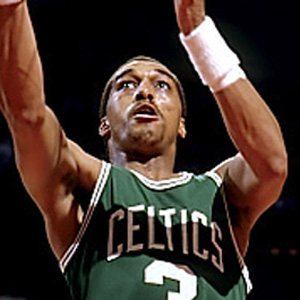 Hall of Fame guard who led the Seattle SuperSonics to their only NBA Championship in 1979. He won two more NBA Championships as a member of the Boston Celtics in the 1980s and he was selected to five NBA All-Star teams over the course of his 14-year career.

He worked as a forklift driver until a growth spurt allowed him to pursue basketball. After spending a season with Pepperdine's basketball team, he was selected 29th overall by the SuperSonics in 1976.

His #3 jersey was retired by the Boston Celtics and he was inducted into the Naismith Memorial Basketball Hall of Fame in 2010.

He married Donna Davis in 1976 and stayed with her until his death; they had three children together.

He played alongside fellow Hall of Famer Larry Bird on the Celtics in the 1980s.

Dennis Johnson Is A Member Of