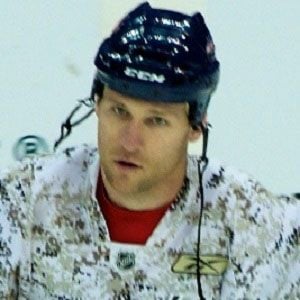 NHL defenseman who became an alternate captain for the Calgary Flames, helping lead the team to the playoffs in 2015.

He was selected 241st overall in the 2002 NHL Draft by the Buffalo Sabres.

He played for the St. Louis Blues, Boston Bruins, Florida Panthers and Washington Capitals before a trade sent him to the Calgary Flames in 2012.

He was born in Kitchener, Ontario, Canada.

He and Mark Giordano became the top two defenders on the Flames. Giordano's injury midway through the 2014-15 season then forced Wideman to take an even bigger role on the team.

Dennis Wideman Is A Member Of