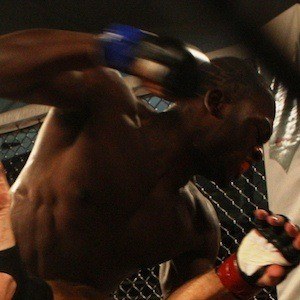 Middleweight division fighter in the Ultimate Fighting Championship whose styles would include boxing, wrestling, muay thau, and Brazilian jiu-jitsu.

He wrestled at John T. Hoggard High School where he also did competitive cheerleading. He then became a 3-time Division II All-American wrestler for the University of North Carolina at Pembroke where he earned a Bachelor of Arts in criminal justice.

He won his professional MMA debut in 2010 with a rear naked choke in under a minute against John Bryant.

He was born in Wilmington, North Carolina.

He made his UFC debut in a bout against Chris Leben after replacing Karlos Vemola who was injured.

Derek Brunson Is A Member Of