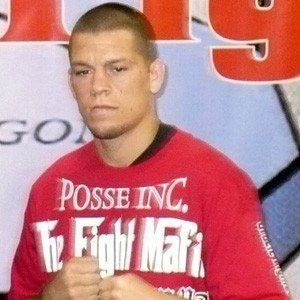 Lightweight and welterweight fighter who won the fifth season of The Ultimate Fighter. In 2016, he submitted Conor McGregor, ending the latter's five-year unbeaten streak.

He began training in mixed martial arts after his brother entered the UFC, training with him at the gym and sparring with him. He made his pro debut at 19 years old.

He's won more than a dozen post-fight bonuses in the UFC, more than half a dozen of which have come by way of Fight of the Night.

His brother Nick Diaz was one of the top welterweight fighters during his time in the UFC, with notable victories over BJ Penn and Robbie Lawler. Both brothers are known for their brash personas and trash-talking.

He's fought for both the WEC and UFC Lightweight titles, but lost to Hermes Franca in 2006 and Benson Henderson in 2012, respectively.

Nate Diaz Is A Member Of