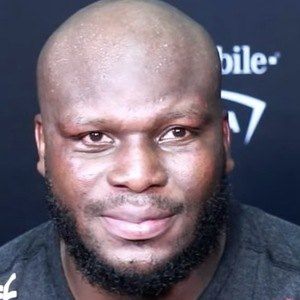 Heavyweight mixed martial artist who has competed across the Bellator, Legacy, and UFC promotions. He signed with the UFC in 2014 after having a two-year streak as the Legacy heavyweight champion.

He initially attended Kilgore College on a football scholarship before serving a three and a half year prison sentence for parole violation. He was introduced to mixed martial arts shortly after his release from jail.

He married his wife April in June 2017. He shares three children with her. He grew up as one of seven siblings being raised by his single mother.

He defeated Travis Browne at UFC Fight Night in February 2017, which earned him his first Fight of the Night honor.

Derrick Lewis Is A Member Of