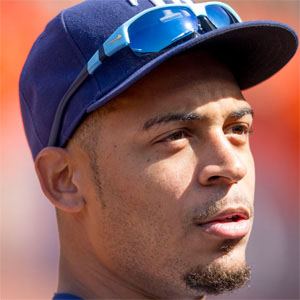 Outfielder who became a member of the Tampa Bay Rays in 2010. He played in the All-Star Futures Game earlier that year.

He was drafted out of Pinson Valley High School but decided to attend Itawamba Community College instead.

In September 2011, he hit the first walk-off home run of his career to give the Rays the 1,000th victory in franchise history.

He is one of three boys born to his mother.

He replaced BJ Upton as the start center fielder for the Rays.

Desmond Jennings Is A Member Of