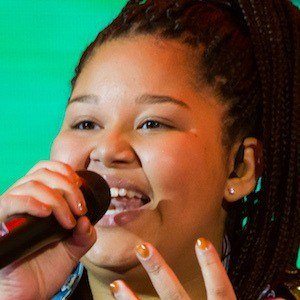 Best known for having won the Junior Eurovision Song Contest of 2015. She won with her song "Not My Soul," which accumulated 185 points. Her score set a new record for most points earned as a winner. She has gained a strong following on her destinyofficial_x Instagram page for her fashion content.

She began singing at age 9 after being encouraged to do so by her music teacher. She competed in various other music competitions prior to her entry in the Junior Eurovision contest.

She was born and raised in Birkirkara, Malta. Her father, Ndubisi Chukunyere, was a footballer in Nigeria.

She broke the record of 171 points scored by a winner that was set in 2004 by Maria Isabel.

Destiny Chukunyere Is A Member Of