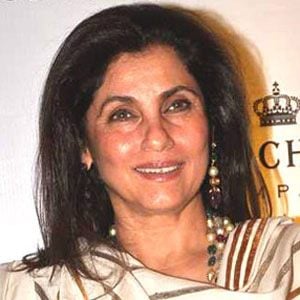 Glamorous Bollywood actress whose fame peaked during the 1980s and '90s for her roles in Kaash, Rudaali, and Krantiveer.

She was introduced to Bollywood by Raj Kapoor, she made a successful debut with the film Bobby, but decided to put her acting on hold to take care of her family.

She made a comeback to films in the late '80s, launching herself to national stardom.

She married legendary Bollywood actor Rajesh Khanna, but the two divorced in 1984. She has two daughters named Twinkle and Rinke Khanna.

In the 2000s, she played supporting roles in acclaimed films like Dabangg, where she played Naini P. Pandey alongside the film's star Salman Khan.

Dimple Kapadia Is A Member Of