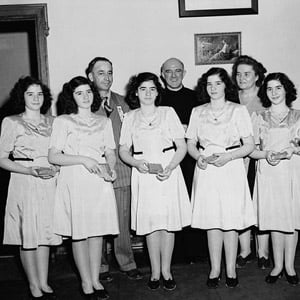 Famous as the first set of quintuplets to live past infancy, these five identical sisters were born prematurely in May of 1934. Two of the quintuplets, Émilie Marie Jeanne and Marie Reine Alma Dionne, died young (at age twenty of a seizure and at age thirty-five of a blood clot, respectively), and a third, Yvonne Édouilda Marie, died of cancer in her late sixties. As of 2014, Annette Lillianne Marie and Cécile Marie Émilda were still living.

After the children's father agreed to show them at the Chicago World's Fair, the Canadian government stepped in to protect the babies, passing The Dionne Quintuplet Guardianship Act, which made the infants government wards for the remainder of their childhoods. The decision was overturned, however, in 1943, and the quintuplets were returned to their birth family.

As a result of being the attending physician at their birth, Dr. Allan Roy Dafoe became internationally famous.

They were born in Ontario, Canada, to Oliva-Edouard and Elzire Legros Dionne, and they had five older and three younger siblings.

They portrayed fictionalized versions of themselves in several Hollywood films, including director Henry King's 1936 movie The Country Doctor.

Dionne Quintuplets Is A Member Of