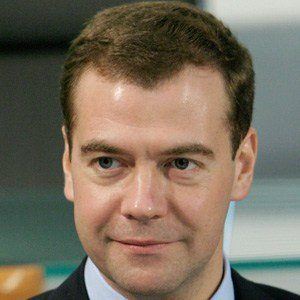 Former president of the Russian Federation who became Prime Minister of Russia in 2012. He also became Russia's youngest President when he was elected to the office at the age age of 42 in 2008. He has worked to end corruption and reform law enforcement in Russia but he is often viewed as Putin's puppet.

He enrolled at the Leningrad State University to study law in 1982 before returning to Moscow to become the Chairman of the Leningrad City Council.

In 2000 he was President Putin's campaign manager.

He became romantically involved with his future wife, Svetlana Linnik, in seventh grade.

Vladimir Putin preceded and succeeded him in office.

Dmitry Medvedev Is A Member Of