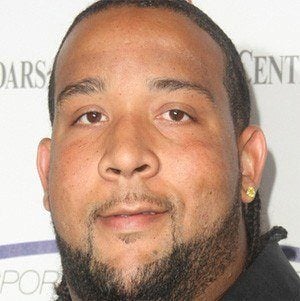 Undrafted offensive tackle from Utah State who started playing for the Tampa Bay Buccaneers in 2006. He was named to his first Pro Bowl roster in 2010.

He was a Second-team All-AC selection during his senior 2005 season at Utah State University.

His father's name is Donald and his mother's name is Nancy. He has a sister named Crystal. He married Dominique Penn in 2012; they have children named Donald III and Dominick Demi. He had a daughter named Dylan from his relationship with Camilla Poindexter.

He caught his first career touchdown pass with a one yard toss from Josh Freeman on November 21, 2010.

Donald Penn Is A Member Of