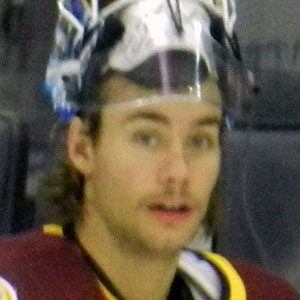 Swedish goaltender whose height and long legs have earned him the nickname "The Stork." He was signed by the Vancouver Canucks in 2010 and made a Stanley Cup Finals appearance against the Boston Bruins in 2011. He was traded to the Carolina Hurricanes in 2015.

He played minor hockey in his hometown of Norrtalje, Sweden.

He made the AHL All-Rookie team as a member of the Canucks affiliate the Manitoba Moose.

His parents are Willie and Mia Lack.

He has played with William M. Jennings Trophy-winning goaltender Roberto Luongo in Vancouver.

Eddie Lack Is A Member Of