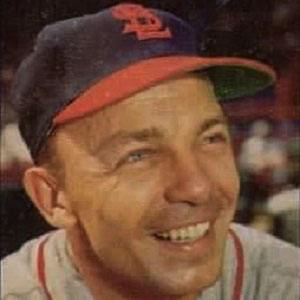 Second baseman nicknamed "The Brat" who made All-Star Game appearances as a member of the Brooklyn Dodgers, Boston Braves and New York Giants. He was a player-manager during his time with the St. Louis Cardinals and was named Major League Manager of the Year in 1952.

He attended Northeast Manual Training School in his hometown of Philadelphia. He was originally signed by the Philadelphia Athletics as an amateur free agent in 1935.

He was survived by children named Beverly, Kay, Mariann and Mike. His father-in-law was MLB outfielder and manager Milt Stock.

He succeeded legendary pitcher Marty Marion as the manager of the Cardinals in 1952.

Eddie Stanky Is A Member Of