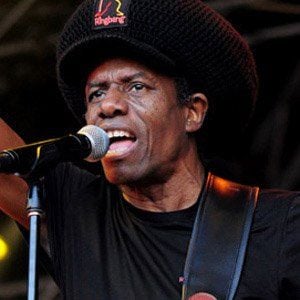 Known for such chart-topping singles as "Baby Come Back," "I Don't Wanna Dance," and "Electric Avenue," this Guyanese-British singer and songwriter released the popular 1982 album Killer on the Rampage. Additionally, he invented a Caribbean music philosophy and genre known as "Ringbang."

He began his successful music career as the songwriter and guitarist for a London-based R&B group called The Equals.

Many of his songs, including "Living on the Front Line" and "War Party," contain political (particularly anti-apartheid) messages.

Born in Guyana, he moved to England as a young child and grew up primarily in the Kentish Town neighborhood of northern London.

A music producer as well as a recording artist, he produced tracks for such legendary musicians as Mick Jagger and Sting.

Eddy Grant Is A Member Of