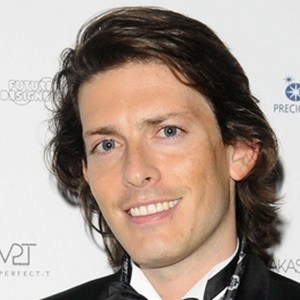 Colombian fashion designer and stylist who is best recognized for having founded the Italian luxury footwear brand Aquazzura. His shoes have been worn by several international icons and celebrities including Beyoncé, Gwyneth Paltrow, and Oprah Winfrey.

He attended both the London College of Fashion and Central Sain Martins. He then started his career working for several luxury footwear brands including Salvatore Ferragamo and Robert Cavalli. In 2011, he launched his own brand Aquazzura.

He has won several honors and awards for his designs including the Vivian Infantino Emerging Talent award in 2013 and the Best Accessories Designer of the Year at the Elle Spain Style Awards in 2014.

While he was born in Colombia, he was raised in both Miami and London.

He has collaborated with several influencers including Olivia Palermo and Poppy Delevingne with whom he created exclusive designs and collections.

Edgardo Osorio Is A Member Of