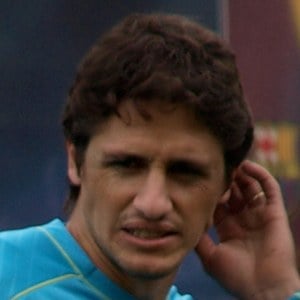 Brazilian professional football player who is known for his work as a defensive midfielder and central defender. He is best known for his work with the Sao Paulo, Lyon, and Barcelona clubs and for also for having played on the Brazil national team.

He began his professional career in 1993 when he played for the XV Jau club. In 1995, he started playing with the Sao Paulo club before switching to Lyon in 2000. That same year he began playing for the Brazil national team. He finished his senior career playing with the Ceara club in 2011.

He was born and raised in Taquaritinga, Brazil and married Simeia Moraes.

He played alongside Marcos Roberto Reis and Ronaldo as part of the 2002 Brazil national team who went on to win the World Cup.

Edmilson Moraes Is A Member Of