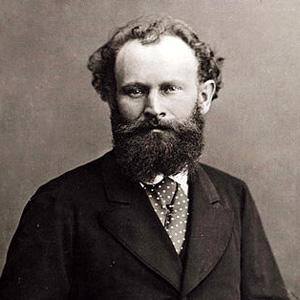 "Le Bar aux Folies-Bergère" painter whose scenes of Parisian life bridged the gap between Realism and Impressionism. He painted "Le déjeuner sur l'herbe" and "Olympia," both of which came to be regarded as foundational works of modern art. However, at the time of their production, these paintings were considered scandalous and indecent.

He failed the Navy entrance exam twice, after which his father finally allowed him to pursue an artistic education.

He was fascinated by leisure and leisurely activities, as exemplified by "Music in the Tuileries" from 1862.

His mother was the goddaughter of the Swedish crown prince and the daughter of a diplomat. He and pianist Suzanne Leenhoff wed in 1863.

He and Claude Monet, another revered French Impressionist painter, were often confused, given the two painters' similar surnames.

Edouard Manet Is A Member Of