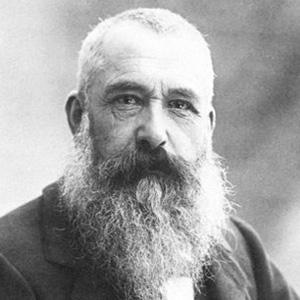 French Impressionist painter famous for such works as Impression, Sunrise and Water Lilies. His artistic mission was to document the French countryside through the various hours of the day and the changing seasons.

He and many other innovative artists of his day were forced to exhibit their works independently after being repeatedly rejected by the traditional Académie des Beaux-Arts' annual exhibition, Salon de Paris.

He painted many of his famous images of water lilies while he was going blind.

He resisted his father's attempts to draw him into the family grocery business and insisted, instead, on becoming an artist. He married Camille Doncieux in 1870, and the two set up house in a French countryside estate in Giverny. Many of Monet's most famous paintings featured the beautifully landscaped grounds of his country home. After Camille's death from tuberculosis in 1879, he was married to Alice Hoschede from 1892 to 1911. He had two sons named Jean and Michel.

He influenced the work of fellow Impressionist painter Edgar Degas.

Claude Monet Is A Member Of