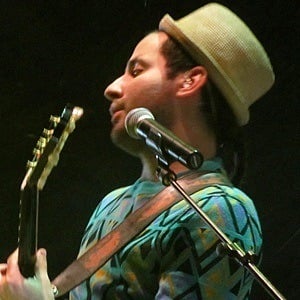 Known by the stage name Visitante, he is a musician and composer for the Puerto Rican band Calle 13. The Grammy-winning artist has released over half a dozen albums including Residente o Visitante and Los de Atrás Vienen Conmigo, both of which won Grammy's for Best Latin Urban Album.

A musician most of his life, he took after his father and eventually he would begin making music with his step-brother, Rene, in 2004. They formed Calle 13 and the band began primarily in reggaeton.

He has appeared in several documentaries including My Block: Puerto Rico and Calle 13: Sin Mapa.

His sister, Ileana, and brother, Rene, are also members of Calle 13. He married Cuban singer Diana Fuentes in 2010.

A successful songwriter, he has penned music for Nelly Furtado, Mercedes Sosa, and Shakira.

Eduardo Cabra Is A Member Of