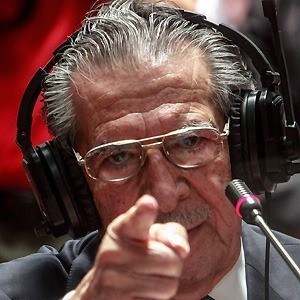 Former de facto President of Guatemala who ruled as a dictator from 1982 to 1983. His military regime committed heinous crimes and genocide against the indigenous population in it's attempt to rid the country of communism.

He participated in the 1954 CIA-organized coup against President Jacobo Arbenz Guzman.

In May 2013 he was convicted of crimes against humanity, including widespread massacres, rape, torture, and acts of genocide against the indigenous population, but the verdict was quickly overturned by the Constitutional Court of Guatemala.

His brother, Mario Enrique Rios, is a Catholic Bishop. He was married to Maria Teresa Sosa Avila and had four children.

Efraín Ríos Montt Is A Member Of