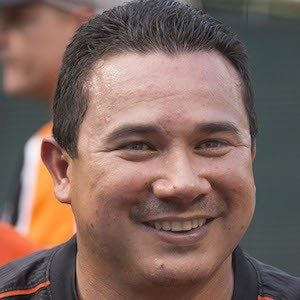 Panamanian MLB catcher whose career spanned from 1996 to 2006.

He was called up to the Major Leagues to back up Sandy Alomar Jr. for the Cleveland Indians in 1996.

He was known mostly for his fielding, but hit a respectable .254 during his 11-year career.

He was born and raised in Chiriqui, Panama.

He had his hands full replacing Texas Rangers catcher Ivan Rodriguez in 2003.

Einar Díaz Is A Member Of