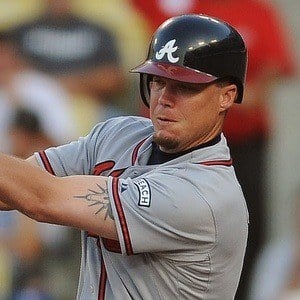 Former MLB third baseman who played his entire 19-year career with the Atlanta Braves, hitting 468 career home runs while winning the 1999 National League MVP award and the 2008 NL batting title. He helped lead the Braves to a World Series Championship in 1995.

He got his nickname from his family, who saw him as a chip off the old block, referring to his father.

He was born Larry Wayne Jones Jr. He has five sons, one with his first wife, Karin Fulford, and three with his second wife, Sharon Logonov. Following their divorce, he married model Taylor Higgins, who gave birth to his fifth son, Cutler, in January 2017.

Star pitcher Tom Glavine was named MVP of the 1995 World Series, where Jones and the Braves defeated the Cleveland Indians in 6 games.

Chipper Jones Is A Member Of