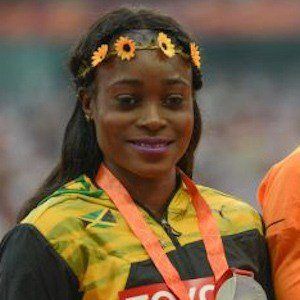 Jamaican track and field sprinter who earned double gold medals after winning the 100 and 200 meter events at the 2016 Rio Olympics. She had previously earned gold at the 2015 World Championships in the 4x100 meter relay.

She ran track at the University of Technology, Jamaica. She won back-to-back Jamaican intercollegiate championships in 2014 and 2015.

She finished with a silver medal with the Jamaican 4x100 meter relay team at the 2016 Rio Olympics. She earned a bronze medal in the 60-meter sprint at the 2016 World Indoor Championships.

She was originally born and raised in Banana Ground, within Manchester Parish, Jamaica.

She became the first woman since Florence Griffith Joyner at the 1988 Seoul Olympics to win gold in both the 100 and 200 meter events in the 2016 Summer Olympics.

Elaine Thompson Is A Member Of