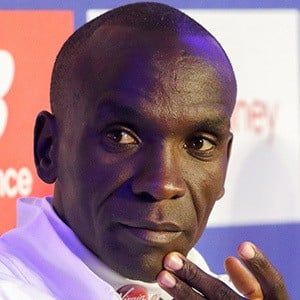 Long-distance runner who won the gold medal in the marathon at the 2016 Olympic Games. He set the official world record for a marathon time after coming in just over 2 hours at the 2018 Berlin Marathon.

He debuted on the international stage at the 2003 IAAF World Cross Country Championships. He won the 5000 meter event and set a junior world record for his finishing time.

He set the Guinness Book of World Records-approved record time of the fastest marathon distance for men when he timed in at under 2 hours on a specially designed course for the Ineos 1:59 Challenge in October 2019. He won four London Marathons between 2015-2019.

He was raised by a single mother in Kenya. He is married with three children.

He competed against Mo Farah at the 2018 London Marathon, which he eventually won.

Eliud Kipchoge Is A Member Of