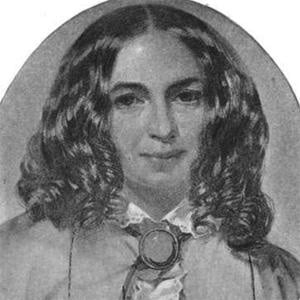 English author who wrote famous love poems to her literary husband, Robert Browning. She was one of the most prominent poets of the Victorian era.

When she was eight years old, she read Alexander Pope's translation of Homer and became deeply interested in Greek and Roman mythology and history. At the young age of ten, she penned her own Homeric-style epic poem, The Battle of Marathon: A Poem.

Her poem, How Do I Love Thee, is considered a masterpiece of romantic poetry.

She was the oldest of twelve children born to wealthy landowner Edward Barrett Moulton-Barrett and Mary Graham Clarke. After having corresponded with him by mail for a long period of time, Elizabeth Barrett met Robert Browning in 1845. She gave birth to her son, Pen Browning, at the age of forty-three.

She was a contemporary of such renowned poets as Alfred Tennyson and William Wordsworth.

Elizabeth Barrett Browning Is A Member Of