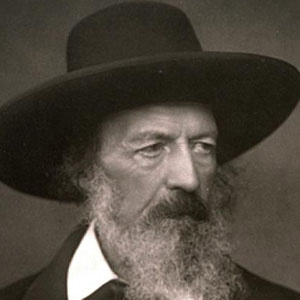 A Victorian-era Poet Laureate of Great Britain, he remains one of England's best-known and most-quoted poets. His most famous poems include "The Lady of Shalott," "The Charge of the Light Brigade," "Crossing the Bar," and "The Lotos-Eaters."

He was a member of the Cambridge Apostles secret society at Trinity College, Cambridge in the late 1820s. He published his first work, a joint collection of his poetry and his brother's, in 1827.

He is known for the timeless line: "Tis better to have loved and lost than to never have loved at all."

He was born in Somersby, England to rector George Clayton Tennyson and Elizabeth Fytche. He later married Emily Sellwood, with whom he subsequently had two children (Hallam and Lionel).

Tennyson's famous poem, "In Memoriam A.H.H.," was written for his friend and fellow poet, Arthur Hallam (Hallam had died shortly before he was to wed Tennyson's sister).

Alfred Lord Tennyson Is A Member Of