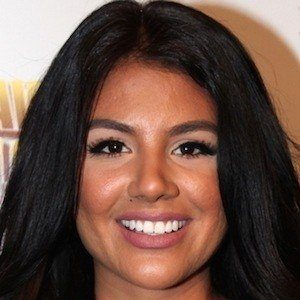 Model best recognized for her appearances in magazines like Sports Illustrated, Maxim, and FHM. She has made regular appearances in music videos for popular hip hop artists and walked the catwalk for several successful clothing brands.

She was a natural athlete throughout high school, developing her natural svelte figure playing basketball. It was after she graduated from Long Beach State University with a degree in mathematics that she turned to a modeling career.

She has made a name for herself in the pageant circuit, being named Miss Puerto Rico at the Hawaiian Tropic International Finale in 2010. She has also done a great deal of acting, appearing in the short film Woman Scorned which screened at the San Diego Black Film Festival.

She was born and raised in the Los Angeles and Long Beach area and is of Mexican descent.

She has appeared in numerous music videos for popular artists like Waka Flocka's "Grove St. Party" and and Soulja Boy's "Speakers Gone Hammer."

Elizabeth Velasquez Is A Member Of